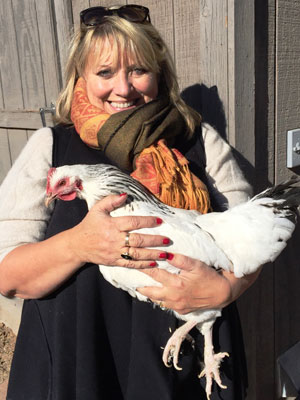 It started in earnest one sun-drenched Saturday a few years ago. A friend and I zipped down from Santa Fe to Albuquerque for the city’s annual chicken coop tour (albuquerquecooptour.com). The tour seemed like a fine chance to see if a few chickens for good fresh eggs were in the Jamison future. Would I be easily dissuaded by chicken personalities and maintenance? Was there an offensive odor to a handful of chickens and their pre-compost poop?

A bus fire on I-25 stopped us in traffic, forfeiting the viewing of a few coops. We missed the Placitas coop that reportedly had most in common with what would be needed to house chickens in rural Tesuque, outside of Santa Fe, with its wild critters and loose dogs. On Sunday morning, my husband and I found ourselves driving south to check out that coop.

We followed up by reading everything we could about happy chickens and their housing. Farmers’ market vendors and folks at feed and pet stores fielded our pesky questions. Other people with chickens in their backyards let us visit. The two of us headed back to Albuquerque for a Los Poblanos Farm workshop about raising chickens, their peculiarities and pecking orders, and how to “dispatch” them, should it become necessary. Deciding we could handle, indeed, enjoy the routines of chicken life, and could come to terms with their eventual deaths, Bill and I were ready to address the birds to come.

We determined that six chickens would lay plenty of eggs for us, and provide extras to share. Six seems like enough birds to be worth the effort expended and not so many that they will become burdensome. I wanted breeds that could handle the weather, lay decently, and play well with others but, most of all, I wanted chickens with eggs of naturally beautiful mixed colors. With six girls, we could start with two each of three breeds.

Christie Green of downtoearthlandscapes.com, gave us early advice on the overall design, along with some garnet-like Hopi corn kernels to plant nearby. Christie’s comments helped us think through our uses of the proposed corner of our property beyond just raising chickens. We decided we’d like the coop to become an extension of an existing shed, which would help screen, psychologically and visually, an oversized house that had mushroomed behind us. The shed houses well equipment, so proximity to it means easy access to water, and also to electricity, for lighting and a seasonal heat mat.

One of my discoveries on the coop tour was the fun of hanging out and watching chicken antics. Since most of our outdoor living areas are open to the sky, Bill suggested a roofed sitting area beside the coop. We knew we wanted the chickens’ outdoor run to be covered too, to keep them safe from hawks, and it could help shield them from the more severe elements of our climate. Extending the sitting area’s roof over the chickens’ home would mean that the run could be tall enough for us to stand up in, another useful consideration. We began to visualize a raised coop, to discourage rodents, with a front panel that opens for easy cleaning.

What to surround the coop? Chicken wire is effective if predators aren’t much of a concern, but to keep the girls safe from coyotes, raccoons, bobcats, and large stray dogs requires something stronger, a metal mesh called hardware cloth which we had used to surround a vegetable plot a few years earlier. Also, it would be important to install a below-ground barrier to foil digging marauders.

We have no place to store bulky bags of organic chicken feed nearby, so we sketched a small storage chest into our plan. We had learned from chicken education 101 that it can be dangerous for youngsters to be housed with bigger birds. A small protected area beside the regular run took shape for the eventual introduction of new chicks. It can work also as a spot to give a chicken a “time out,” if one is bullying others, or needs isolating for another reason. Placing this at the opposite end of the run from the feed chest would help deflect occasionally fierce wind. We went from drawings to marking off a spot 12 X 5 feet, enough to give the girls a comfortable home.

We were good at figuring out what we want, but we are hopeless at building anything. Tesuque native Paul Griego and a colleague, Juan Olvera, took on the project. Paul and Juan had built about everything other than a chicken coop, but Juan had chickens of his own. From our vague sketches, they figured out the details to bring our plan to life. Since we have something of a permanent address, they suggested a cement border dug into the perimeter as a predator barrier rather than the wire version we had been considering. Our very particular design was about 4 days’ work. With the quality of Paul and Juan’s craftsmanship, everyone coming to see their progress started kidding about the chicken mansion. To finish, we repurposed flagstone for our sitting area and planted fruit trees nearby.

Do any 6 chickens need this lavish attention? Of course not. But we are getting the invaluable experience of coming closer to an important food source, and sharing the joy of this with our family and friends. I’ll tell you more about The Girls in another post.